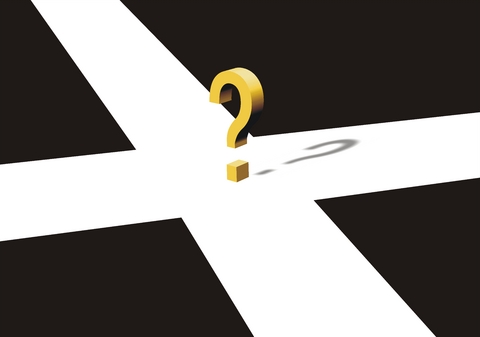 I chose the picture of the question mark at a crossroads because of the subject matter of this post.

I've struggled with the question of whether I'm procrastinating or if there's “something” innate prompting me to be patient.

This issue has occupied my thoughts so much that I started paying closer attention to what goes on when I have a task to complete and I'm not getting it done.

Amazingly, I seem to have mostly figured out when I'm procrastinating and when I'm in an actual holding pattern; being patient before I actually move forward.

I wrote that previous sentence in a wishy-washy way on purpose, because I don't think I totally have the solution, but I know I'm on the right path.

For me, this is how I know which state I'm in…

If I'm being patient–sitting in that holding pattern–I'm not trying to fill the time with other things I have going on, and I'm cognizant that I could be doing that thing that I'm not doing and that I'm not doing it because something is telling me to wait; be patient.

That might not make any sense to anyone else, but it makes perfect sense to me.

So here's the rub…

Whether I'm procrastinating or being patient, they look like the same things to those outside of the scope of my mind, even though I know the difference between the two for myself.

This is when being comfortable in my own skin comes in handy.

Since I know myself, then others can't make me feel badly when I've set a deadline and I miss that deadline. Something I learned from a brotha in the Nation of Islam when I was in undergraduate school: “God plans, and man plans, but God is the best of planners.” I heard that once, and it's stuck with me all these years, because it's definitely true, if you believe in God, and I do.

Usually, when I'm patient and stay in the holding pattern, that thing that I can't put my finger on comes to pass and I'm like, “so that's what I was waiting for?”

I've learned to be patient, because that thing always reveals itself in time.

I've also learned to push through procrastination when I'm not waiting on anything and just avoiding getting something done while I do everything else besides. 🙂

Anyway, maybe you've found yourself at the same crossroads. Hopefully, something I've shared helps you discern whether you're wasting time or waiting on perfect timing.